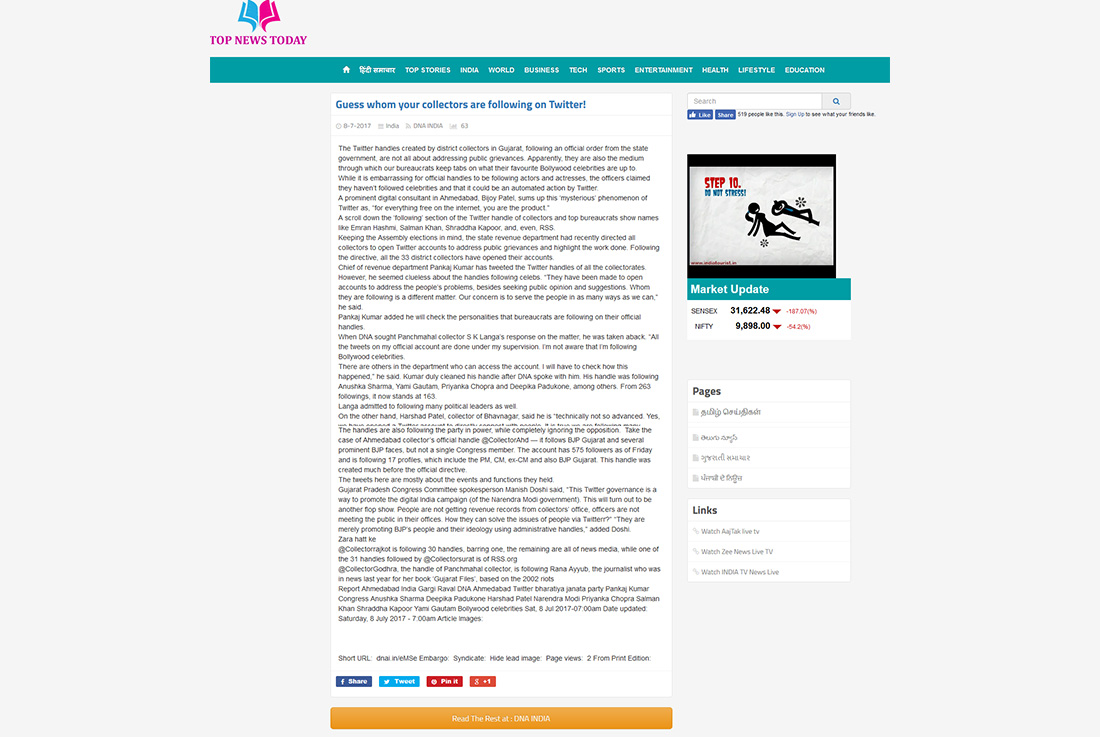 Guess whom your collectors are following on Twitter! | Top New Today

The Twitter handles created by district collectors in Gujarat, following an official order from the state government, are not all about addressing public grievances. Apparently, they are also the medium through which our bureaucrats keep tabs on what their favourite Bollywood celebrities are up to.
While it is embarrassing for official handles to be following actors and actresses, the officers claimed they haven’t followed celebrities and that it could be an automated action by Twitter.
A prominent digital consultant in Ahmedabad, Bijoy Patel, sums up this ‘mysterious’ phenomenon of Twitter as, “for everything free on the internet, you are the product.”
A scroll down the ‘following’ section of the Twitter handle of collectors and top bureaucrats show names like Emran Hashmi, Salman Khan, Shraddha Kapoor, and, even, RSS.
Keeping the Assembly elections in mind, the state revenue department had recently directed all collectors to open Twitter accounts to address public grievances and highlight the work done. Following the directive, all the 33 district collectors have opened their accounts.
Chief of revenue department Pankaj Kumar has tweeted the Twitter handles of all the collectorates. However, he seemed clueless about the handles following celebs. “They have been made to open accounts to address the people’s problems, besides seeking public opinion and suggestions. Whom they are following is a different matter. Our concern is to serve the people in as many ways as we can,” he said.
Pankaj Kumar added he will check the personalities that bureaucrats are following on their official handles.
When DNA sought Panchmahal collector S K Langa’s response on the matter, he was taken aback. “All the tweets on my official account are done under my supervision. I’m not aware that I’m following Bollywood celebrities.
There are others in the department who can access the account. I will have to check how this happened,” he said. Kumar duly cleaned his handle after DNA spoke with him. His handle was following Anushka Sharma, Yami Gautam, Priyanka Chopra and Deepika Padukone, among others. From 263 followings, it now stands at 163.
Langa admitted to following many political leaders as well.
On the other hand, Harshad Patel, collector of Bhavnagar, said he is “technically not so advanced. Yes, we have opened a Twitter account to directly connect with people. It is true we are following many people, but if there are personalities that an official handle need not follow, I will check and un-follow them on Monday.” DNA spoke with him well past the office time on Friday. Among the 53 handles he is following are @sonakshisinha, @Asli_Jacqueline , @ShraddhaKapoor, etc.
The handles are also following the party in power, while completely ignoring the opposition. Take the case of Ahmedabad collector’s official handle @CollectorAhd — it follows BJP Gujarat and several prominent BJP faces, but not a single Congress member. The account has 575 followers as of Friday and is following 17 profiles, which include the PM, CM, ex-CM and also BJP Gujarat. This handle was created much before the official directive.
The tweets here are mostly about the events and functions they held.
Gujarat Pradesh Congress Committee spokesperson Manish Doshi said, “This Twitter governance is a way to promote the digital India campaign (of the Narendra Modi government). This will turn out to be another flop show. People are not getting revenue records from collectors’ office, officers are not meeting the public in their offices. How they can solve the issues of people via Twitterr?” “They are merely promoting BJP’s people and their ideology using administrative handles,” added Doshi.
Zara hatt ke
@Collectorrajkot is following 30 handles, barring one, the remaining are all of news media, while one of the 31 handles followed by @Collectorsurat is of RSS.org
@CollectorGodhra, the handle of Panchmahal collector, is following Rana Ayyub, the journalist who was in news last year for her book ‘Gujarat Files’, based on the 2002 riots
Report Ahmedabad India Gargi Raval DNA Ahmedabad Twitter bharatiya janata party Pankaj Kumar Congress Anushka Sharma Deepika Padukone Harshad Patel Narendra Modi Priyanka Chopra Salman Khan Shraddha Kapoor Yami Gautam Bollywood celebrities Sat, 8 Jul 2017-07:00am Date updated: Saturday, 8 July 2017 – 7:00am Article Images: